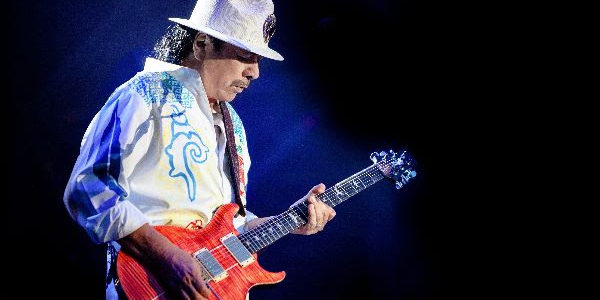 CARLOS SANTANA AND HOUSE OF BLUES ANNOUNCE
THE GUITAR LEGEND’S RETURN FOR 2020
Tickets for the 2020 performances go on sale Friday, Aug. 9 at 10 a.m.

Las Vegas (Aug. 5, 2019) – Carlos Santana continues an enormous year with touring dates, milestone anniversaries, the continuation of his House of Blues Las Vegas residency and the release of his latest album, Africa Speaks. As he celebrates these accomplishments, another exciting announcement comes to light…the legend’s residency, An Intimate Evening with Santana: Greatest Hits Live at the House of Blues Las Vegas at Mandalay Bay Resort and Casino, will continue into 2020. Tickets for the 2020 performances will go on sale Friday, Aug. 9 at 10 a.m. Tickets for all previously announced show dates are currently on sale. All shows begin at 8 p.m.

Santana is preparing for his fall 2019 run at House of Blues which kicks off mid-September.

The dates in 2020 mark the eighth year of the intimate, live concert experience at the House of Blues where fans have partied all night within a few feet of the musical icon with the La Zona Fiesta tickets. The popular VIP packages will again be available for purchase with customizable experiences that include limited edition photos and specialty dining/beverage packages featuring stage-side dining.

Tickets for An Intimate Evening with Santana: Greatest Hits Live start at $99.50, plus applicable fees and go on sale Friday, Aug. 9 at 10 a.m. Tickets are available by visiting House of Blues.com/Santana, MandalayBay.com, Ticketmaster.com or by calling 800-745-3000. For additional information, visit santana.com. CITI presales begin Tuesday, Aug. 6 at 10 a.m., visit CitiPrivatePass.com for more information. CITI is the official credit card of the concert series. The House of Blues, Live Nation and Foundation Room presales begin Wednesday, Aug. 7 at 10 a.m.

A portion of all tickets sold will be donated to The Milagro Foundation. Milagro (“Miracle”) is a charitable foundation supporting underrepresented and vulnerable children and youth in the areas of arts, education and health. The Milagro Foundation was created in 1998 by Carlos Santana and his family to benefit children worldwide.

Another contribution will be made to the House of Blues Music Forward Foundation. Founded in 1993, Music Forward Foundation accelerates real-life skills for youth using music as the bridge to success. By channeling the power of music, we help kids create pathways to productive, sustainable, and fulfilling lives. Through music industry mentorships and access to music education, we are removing the barriers between need and success. Learn more at www.hobmusicforward.org

About Carlos Santana:
2019 marked the 20th anniversary of Carlos Santana’s groundbreaking album Supernatural and the 50th anniversary of his legendary performance at Woodstock. To date, Santana has won 10 GRAMMY awards and three Latin GRAMMYs. He won a record-tying nine GRAMMY awards for a single project for 1999’s Supernatural (including Album of the Year and Record of the Year for “Smooth”) as well as three Latin GRAMMYs. He has also received the Billboard Century Award (1996), was ushered into the Rock and Roll Hall of Fame (1998), received the Billboard Latin Music Awards’ Lifetime Achievement honor (2009), and was the recipient of the Kennedy Center Honors Award (2013). Among many other honors, Carlos Santana has been cited by Rolling Stone as No. 15 on their list of the “100 Greatest Guitarists of All Time.” In 2018, he released his first MasterClass. In it he teaches the art, heart and soul of guitar, reaching deep into the spirituality and tonality of his playing to help students become more authentic and expressive artists. In early 2019, Santana released the EP In Search of Mona Lisa (Concord Records) which was followed by the critically-acclaimed Africa Speaks. The energy infused full-length album of new material was released June 7 (Concord Records) and found Santana teaming up with legendary producer Rick Rubin and Spanish singer Buika for one of the Rock and Roll Hall of Fame guitarist’s most ambitious projects to date. Santana is currently headlining a multi-year residency at House of Blues at Mandalay Bay Resort and Casino in Las Vegas.

About House Of Blues:
Founded in 1992, the 11 House of Blues are located throughout the United States and form the country’s pre-eminent group of intimate music venues. Each features state-of-the-art sound and lighting technology in one-of-a-kind custom designed environments aimed to bring fans as close as possible to the artists. Every location’s restaurant and bar is adorned with signature original folk-art – part of the world’s largest collection – combined with the House of Blues legendary hospitality and tantalizing cuisine.